After 201 appearances, 43 goals and 28 assists, it could be that Chelsea’s Pedro has played his final game at Stamford Bridge.

The Spanish forward has made it clear he would be leaving the Premier League club at the end of the season when his contract expires, and with no restart of the 2019-20 season in sight, time could be up for the former Barcelona man in London.

What comes next, however, remains a mystery, but one thing is certain: AS Roma’s Paulo Fonseca would like him in Italy’s capital.

Corriere dello Sport explain the 32-year-old is the Portuguese manager’s ‘favourite’ to help their attack, which led to an approach in January being turned away by Chelsea.

The Blues no longer have that power, as Pedro is free to talk to whomever he pleases, which is why Roma have reached out to the player’s entourage and offered him a contract worth €3m/year. 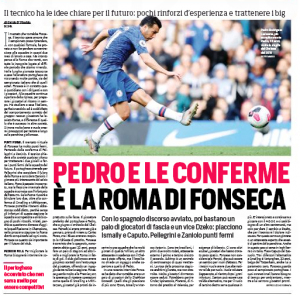 The aim here would be to do a successful deal for a Premier League player, much like what they achieved with the loans of Chris Smalling and Henrikh Mkhitaryan, adding experience to a young squad.

Fonseca is said to be ‘convinced’ Pedro still has a ‘couple of seasons at the highest level’ left in him, and while Willian was also offered to them, he would cost a lot more wages wise than the Spain international.

Now that ‘talks have begun’ for the Chelsea winger, it’s just a matter of waiting and seeing if he accepts what they have to offer.