For those who don’t follow French football that closely, Sunday night was Le Classique, the biggest match in France, between Marseille and Paris Saint-Germain.

Normally dominated by the team of superstars, the fixture was far closer than anticipated, with the game ending 0-0, seen as a fair result based on how the game went.

However, a big reason why the game wasn’t dominated by Paris Saint-Germain was the presence of the two Arsenal loanees in the Marseille side and their performances.

We’ll start with the Gunners’ defender William Saliba, who was voted man of the match alongside Duje Caleta-Car by La Provence, with an average of 8.7/10.

The young centre-back performed an inch perfect tackle late on in the game on Kylian Mbappé to stop his side from conceding, and the local newspaper laud his ‘serenity, calmness and positioning’, predicting that the Arsenal starlet’s ‘future is with the France national team’. 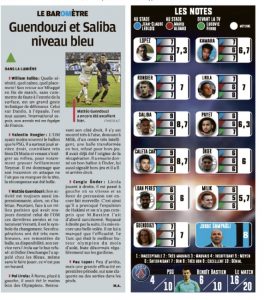 Then, it’s Mattéo Guendouzi’s turn, with the midfielder most likely being bought by the Ligue 1 side at some point this season.

La Provence explain the Arsenal man is the reason why Marseille’s midfield wasn’t dominated by Paris Saint-Germain’s, as it has been so many times over the past few years, and is seen as ‘a symbol of change’ in the south of France under Jorge Sampaoli.

That’s why it ‘isn’t a coincidence’ that Didier Deschamps recently called him up to the France national team.