The striker’s been in fine form for the Belgian club last season, scoring 21 goals and registering six assists in 31 league matches.

His impressive scoring record could see the Jupiler Pro League side force to cash in from the Frenchman’s sale this summer.

The Welsh club have come forward and are willing to pay under €6m for the frontman. If he’s sold for that figure, Henry’s sale will break Leuven’s previous club-record sale of €815k. 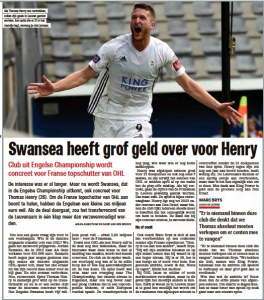 Henry is in ‘interested in the transfer to the Championship’, but he would prefer to make a jump to the top league.

The deal isn’t finalised yet because Swansea haven’t found an agreement with both Leuven and the player, who are waiting to find out if other clubs would come forward to sign him.

Henry is much likelier to leave the club since his manager, Marc Brys has started plans for next season without including his top scorer.

“Henry is ready for something different. He wants to fulfil his ambitions and at least test his worth at a higher level. He is 26, it’s a bit now or never for him. A healthy ambition, I call it,” Brys said.