As Swansea City fans should know by now, the fact that Carlos Carvalhal is in charge of the club means they will get a lot of attention from the Portuguese press. More than ever.

The 8-1 win over Notts County last night was enough for a big story in Portuguese newspaper O Jogo, who claims the manager was able to make ‘history’ with the result.

The outlet went after Carlos Carvalhal’s largest score in his career, and found out that this was indeed his best result. His previous record had been back in 2002, when his club Leixões beat Joane 7-0. 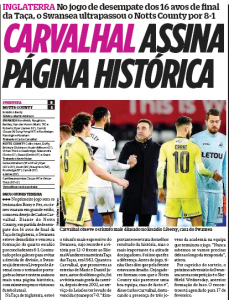 Just so you can understand the story is taken as a big deal, this is the biggest article in O Jogo’s international section today.

The newspaper doesn’t only talk about the record, but also shows the Swansea match summary, Carvalhal’s background at the club by beating Liverpool and Arsenal, and also the draw’s ‘magic’, which will put Carvalhal against his former side Sheffield Wednesday in the round-of-16.

It seems the Portuguese press has a new favourite (don’t tell Wolves), so prepare for a whole list of players to be pushed the club’s way if Carvalhal stays on for next season.

If the manager can somehow get a tune out of Renato Sanches before the end of the season, then there’ll be Swansea-mania in Portugal.