Home Uncategorised ‘For sure there was Newcastle’ – Magpies among European sides who made...
SHARE

Eventually settling on Callum Wilson from AFC Bournemouth for a hefty fee of £20m, Newcastle United spent a long chunk of their summer looking for a striker.

The England international has repaid their trust in him with four goals in his first five games, so the decision to go for him is certainly justified so far, and barring the rather wishful attempts to sign Ciro Immobile during the takeover talks, few of their other targets would have made such an instant impact.

One of those, according to La Nazione, was Dusan Vlahović, currently at Fiorentina.

That’s what the Italian newspaper report on Friday, looking at the 20-year-old’s rather lacklustre start to the new campaign, scoring one goal in his first four league appearances.

Fiorentina were approached by a number of clubs for the young Serbian striker, who has two caps for his country, with Wolfsburg making the early move, offering up to €30m in a ‘complex operation’.

Later on in the window, AS Roma ‘came forward heavily’ and ‘through a deferred payment like that of Chiesa’s, the final figure even went towards €40m’. 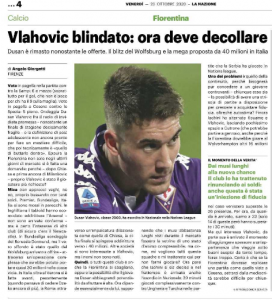 In England, it was reported Arsenal were keen, but that hasn’t been confirmed by La Nazione, who add there was ‘certainly the interest of other clubs’ and ‘for sure there was Newcastle’.

If the Magpies put forward an offer, the amount hasn’t filtered, but there is a question reigning in Florence these days: why?

La Nazione say ‘either all these clubs and Fiorentina are wrong or the possibility the young Dusan has great potential to exploit is high’.

Only time will tell, and a lot will be up to Vlahović himself, but he’ll be developing in Florence for the time being, far away from St James’ Park.