Home Championship Sunderland player’s summer transfer at €15m, or as low as €4.5m with...
SHARE

Wahbi Khazri’s good season on loan from Sunderland at Rennes has been the subject of many French articles, praising the footballer for how well he’s done since leaving English football.

Rennes don’t have an option to sign Khazri permanently from Sunderland in the summer and that means the club will struggle to get a deal done. They know this, and Rennes’ president this week spoke publicly about the difficulty of signing Khazri, perhaps making sure fans are aware of the situation.

L’Equipe have an article on the player in their Saturday edition and have asked him about a summer move: “Sincerely, I really do not think about it. Even with my wife, I don’t talk about it at all.”

As for a valuation, L’Equipe believe that with a good end to the season and some good flashes at the World Cup, Khazri could be worth around €15m. 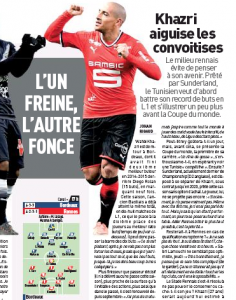 However, they believe Sunderland will be forced into a quick cut-price sale if they’re relegated, meaning the actual price for Khazri could be as low as €4.5m.

That figure comes from the player’s amortised value on the Championship club’s books.

Whichever division Sunderland are in, they’ll surely look for closer to the €15m figure.