Despite making his debut for Chad’s national team earlier this month, Haroun Tchaouna is currently without a club.

The 19-year-old last played for Caravaggio in Italy’s Serie D, and after a good 15 appearances for the local side (according to Transfermarkt), during which he scored three goals, he moved on and is looking for a new landing spot.

One of the clubs after him, according to the player himself in a chat with TchadInfos, is Sunderland in League One, who have invited him over, although what for isn’t said.

He said: “Sunderland offered me to come, but I’m waiting the result of my test with Angers”.

The forward is said to have recently undergone a first trial with the Ligue 1 side, where he could end up teaming up with his compatriot Casimir Ninga, so that might be why he has a preference for the French club.

That, and he would be playing in a club in France’s top-tier, which might be something he wants more than League One in England.

As TchadInfos put it, the next few hours/days could be very important for Tchaouna, as Angers deciding against signing him up could push him towards the Stadium of Light and Sunderland.

We’ll try and keep an eye on this over the next few days to see if anything pops up. 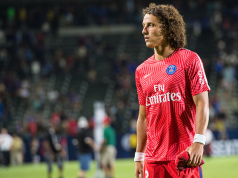