Sent out on loan to Rennes by Simon Grayson and Sunderland at the start of the season, Wahbi Khazri has enjoyed his return to Ligue 1, emphasising that by scoring two goals at the weekend.

Happy to just be playing regular football again, the Tunisia international was decisive for the mid-table French club, as he was fielded as the sole striker in a 2-1 goal against Nantes.

In fact, Khazri impressed so much with his two clinical finishes that he ended up featuring in L’Equipe’s team of the week for the second time this year, given a 7/10 (which is very good by the French newspaper’s standards). 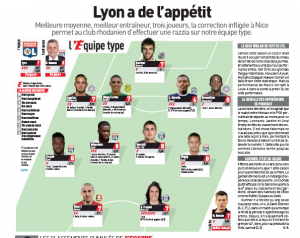 Explaining recently that he didn’t fit into the former Sunderland manager’s plans because of Grayson’s desire to play ‘Championship football with long balls’ and was ‘pushed to one side’ by David Moyes, who ‘didn’t believe’ in Khazri’s qualities, the 26-year-old is slowly making them regret their decision.

With four goals in just seven league appearances for Rennes so far, perhaps Chris Coleman, if he manages to redress the situation by the end of the season, might decide to keep him on next year.

If not, Khazri has already made it clear: “I’ll play in League One.”

At the end of the day, he doesn’t care, He just wants to enjoy his football.