Sunderland and Burnley are reportedly in the race for the Benfica winger Mehdi Carcela-González.

The player is expected to leave the Portuguese club this summer, and after a few failed negotiations, the English sides are described as strong competitors for the signing. 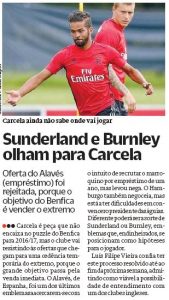 Alavés, from Spain, tried to get the player on loan, but Benfica’s intention is to let him go permanently. Hamburg are said to be struggling with the fee.

But Sunderland and Burnley are mentioned by O Jogo as clubs who could afford him.

Carcela was much linked to Leicester during the summer, but after a few months of rumours, the Portuguese papers realised the bid never arrived.

O Jogo doesn’t say how much Benfica are demanding for him. When the Leicester interest was first reported, the Portuguese side were said to want between €8m and €10m.