Gedson Fernandes’ loan move to Tottenham Hotspur hasn’t exactly been a successful one.

The midfielder arrived just under a year ago, in an 18-month loan from Benfica. In his first campaign with Spurs he managed 61 minutes across seven Premier League matches, picking up further appearances in the Champions League and FA Cup.

This season hasn’t seen him kick on, rather the opposite. Starting against Marine on Sunday, Gedson was making only his second appearance of the season, his only other match coming in September in the EFL Cup.

Sunday’s match may have been a farewell for the 22-year-old, with A Bola reporting Benfica have received enquiries from clubs about both a loan and permanent transfer.

Tottenham have made it clear they won’t stand in his way should he get a better opportunity, and chance of more minutes, elsewhere. 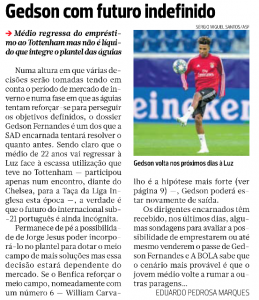 A Bola state it’s ‘clear’ Gedson will return to Benfica this month, and it’s then just a question of what the Lisbon club decide to do with him.

At this stage of his career he needs far more minutes than he’s been getting at Tottenham.