Over the past few months, we’ve tried to avoid covering every single mention of Matteo Darmian’s potential exit from Manchester United since there aren’t enough days in a week to do that, and we also like our sanity the way it currently is.

However, when talk of a bid, past or present, appears, we feel compelled to do something on it, as it shows how questionable José Mourinho’s decision to keep the Italian around really is.

Let’s start with how the information came about first, as Gazzetta dello Sport report on Wednesday that Inter are preparing to fall back on the Darmian option after a deal for Sime Vrsaljko started to slip out of reach.

You all know about his contractual situation (runs out in June next year but Manchester United have a unilateral option to trigger a one-year extension), meaning it’s unlikely he’ll leave on a free in the summer regardless of whether his future is at Old Trafford or not. 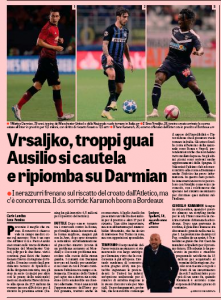 However, the Italian newspaper explain that Inter, and this wasn’t reported as far as we can tell, tried to sign him over the summer by offering €4m for a one year loan and then €17m to make the move permanent.

That would have meant €21m for a player who has two appearances this season, and one they spent less than that on in the first place (£16m).

We get that you need squad depth and all that, but saying no to that seems odd.

Worst case scenario, he wouldn’t have played at Inter, returned to Manchester United (who would’ve been €4m richer) and everyone would have been in the exact same situation as they will be in the summer anyways.

For January, Inter are said to be ‘moving very early’ because of competition, notably Roma and Napoli, but until we see another bid put forward, we’ll take that with a pinch of salt.