Ousmane Dembélé’s contract expires in 2022 and his decision to not accept Barcelona’s renewal proposal has resulted in frustration at the Camp Nou.

The winger’s suitors continue to grow and after Manchester United and Newcastle United, Tottenham Hotspur were added to the list earlier this month.

On December 8th, Mundo Deportivo reported the 24-year-old’s agent is handling an offer from the north London club. Four days ago, the same newspaper reported Spurs are in contention to sign him.

The France international has indicated to Barcelona his desire to sign a new deal, but his agent, Moussa Sissoko, has not responded to the latest proposal made by the Catalan club.

That’s according to Mundo Deportivo, who say that at the Camp Nou, they are ‘starting to get fed up’ with the player and his representative. 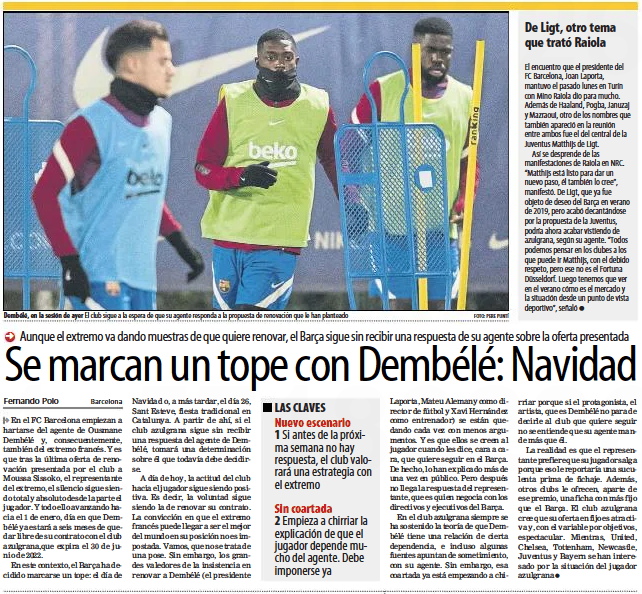 Xavi Hernández’s side have set a new deadline of December 26th, for the wideman to make a firm decision on his future. If not, the Spanish giants will then make a decision for him.

It’s said the former Borussia Dortmund man’s agent ‘prefers’ that the player leaves the Camp Nou, preferably as a free agent next summer to collect a ‘succulent transfer bonus’. In addition to this, other clubs offer the attacker a better deal than what Barca can propose.

The report doesn’t specify which clubs have sent offers to Dembélé, but they do say Antonio Conte’s side are one of the teams who have been ‘interested in the situation’ of the Frenchman.

Mundo are suggesting Tottenham are one of the sides to have made an offer to the player. His agent wants to take him elsewhere and this is not pleasing Barcelona.