Manchester United wanting to sign Barcelona’s Ansu Fati in 2020 was repeatedly reported by the Catalan media in the second half of last year.

It was then suggested Jorge Mendes set up a €150m move to Old Trafford, but the La Liga side were not interested in any potential deal.

Mundo Deportivo say Barca are of the belief Fati was discussed when the super-agent was negotiating with the Red Devils for the Portugal international’s transfer.

These discussions are labelled as ‘something normal’, given that everyone is aware the 18-year-old’s contract officially expires in 2022.

The Spanish club unilaterally have an option to extended his contract until 2024, which they have decided not to exercise. That’s because Barca have trust in the player and his camp, and confidence over reaching an agreement for a new deal.

Even though there’s a suggestion Manchester United would have asked about Fati with Mendes, Mundo say Barcelona have made it ‘very clear’ their young star is ‘non-transferable’. 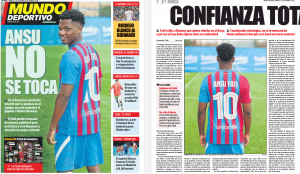 Ole Gunnar Solskjaer has several options from which to pick his front three and that will improve when Marcus Rashford and Amad Diallo regain full fitness.

It doesn’t make sporting sense for United to look at Fati, especially when there is uncertainty as to how he’ll perform after returning from a serious injury.