Home Europe Suggestion Liverpool have moved on to another option, after dropping Timo Werner...
SHARE

Liverpool have been linked with Barcelona’s Ousmane Dembélé in the past few days.

On June 3rd, journalist Gianluca Di Marzio reported on his website the Reds have approached the forward and the La Liga winners, to take the former on loan with ‘right to redemption’.

A day later, Cuatro in Spain made similar claims and explained the Merseyside club’s interest in the 23-year-old is ‘getting serious’.

Mundo Deportivo on Friday relay claims made in Italy and then discuss how Jürgen Klopp would have better information about the Frenchman due to his past connection with Borussia Dortmund.

The World Cup winner never played under the German at Dortmund, but the Liverpool boss ‘knows perfectly’ about the player as he has received good reports about him from the Bundesliga side.

It’s claimed that those in charge at Anfield are discussing Dembélé as a ‘suitable replacement’ for Sadio Mané, if he decides to leave the club or if Liverpool fail to land Timo Werner.

In the last 24 hours, there have been concrete reports from England and Germany that Chelsea are edging closer to acquiring the RB Leipzig star’s services.

With Werner set to join the Blues, Mundo suggest Liverpool could try to sign Dembélé. 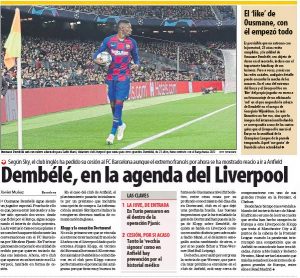 Although Klopp has received good reports about the Barca player, there isn’t anything concrete in Mundo’s report to indicate that Liverpool will take Dembélé, even if it’s on a loan deal.

It’s also worth nothing the attacker’s agent has also stressed his client will not leave the Camp Nou this summer.