Thomas Partey has been repeatedly linked with a move to Arsenal this summer, while Atlético Madrid have been trying to secure his long-term future.

He has a €50m release clause, and earlier this week, Ghana Soccer Net reported the midfielder is ‘on the verge’ of signing an extension with Diego Simeone’s side.

Mundo Deportivo on Thursday have echoed the claims made by Ghana Soccer Net.

As per the report, they state the 27-year-old’s long-term future is becoming clearer and ‘everything indicates’ he will continue with the La Liga side.

Atlético’s renewal offer has been on the table for months, and it includes a 100 percent raise in salary and will also increase the Ghana international’s release clause.

After evaluating the contract offer for months, Thomas has decided to continue in Madrid. He is ‘close to saying yes’ to the Spanish side.

Mundo’s report suggests Thomas is snubbing the Emirates club because Atlético’s ‘sporting level’ is far ahead that of Arsenal.

Simeone’s men have already qualified for next season’s Champions League, but that’s not the case with with the London club.

In addition to this, Atlético are in contention to win Europe’s elite club competition this season, while Arsenal have been knocked out of the Europa League. 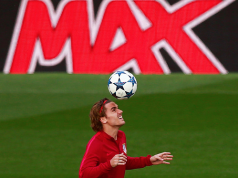