As Juventus play Fiorentina at the weekend, Tuttosport today features a story on the Old Lady’s wish to buy Dusan Vlahovic from La Viola in the summer.

Since it’s impossible to speak about the striker without mentioning the race which is being formed for his signing, the newspaper names a couple of other clubs who could be his destination next season.

One of them is now said to be Newcastle United, who should have the economic power to join such an auction.

Tuttosport writes that ‘submersed in Saudi dollars’, the Magpies wouldn’t have the ‘technical appeal’ to attract some other targets such as Erling Haaland and Kylian Mbappé. So Vlahovic would be a more suitable target for now. 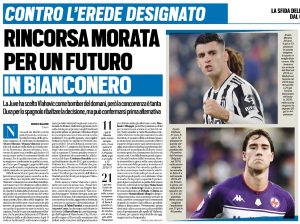 But Newcastle would obviously need to face harsh competition for the signing. Tuttosport claims that besides Juventus, Tottenham are another club who’ve been following him, as Fabio Paratici and Antonio Conte could sign the player to replace Harry Kane.

Since Vlahovic’s contract with Fiorentina expires in 2023, La Viola are expected to work on the sale next summer. The newspaper believes that it will take between €50m and €60m to sign him.