It’s claimed the Championship club’s new manager Marcelo Bielsa ‘wants to have Caicedo in attack’, and La Grada go on to say the Ecuadorian striker ‘would welcome the possibility’ of the transfer and returning to English football this summer.

The 29 year old played for Manchester City from 2008-2011 and despite a difficult time at the club he enjoyed it enough to fancy a return to the country. With a contract at Lazio until June 2020, Caicedo isn’t an important player for the Italian club and would be allowed to leave.

This all sounds like a reasonable possibility, until a dig on Google. A week ago HITC published an article saying Leeds ‘should act fast’ to sign Caicedo, adding ‘Leeds boss Marcelo Bielsa must consider a move that would see the Argentine manager raid his former side Lazio to land the ex-City striker.’

It’s now a standing joke with Leeds fans on how many players HITC have pushed towards the club, but it’s creating issues wider in the European media and perhaps even with footballers and their representatives. 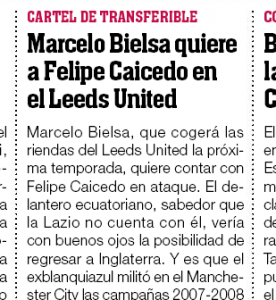 Whilst the article is an opinion piece, that isn’t made entirely clear and it’s easy to see how it could be mistaken for news.

The way La Grada push their line on Caicedo and Leeds it sounds like they’ve used Espanyol contacts to see what the player’s wishes would be, and if that’s all because the striker was recently chosen as one of a never ending stream of players linked to Leeds for no real reason then it’s probably going too far.