Currently enjoying life at Royal Antwerp in Belgium, Dieumerci Mbokani is back in the country where his European adventure started.

Playing for Anderlecht, Wolfsburg, Monaco and Dynamo Kiev throughout, the DR Congo forward was also loaned out to Norwich and Hull City when he was at the Ukrainian side.

Sitting down with Sport/Foot Magazine, the 32-year-old was asked about his career so far, specifically asking him about his time with the Canaries and the Tigers.

He said: “When I arrived in Ukraine, yes, of course, I felt that my dream was coming true. I’d say things didn’t go too badly at Norwich. I did score some goals over there, but then it wasn’t as good at Hull. An injury, a manager change. It made things a bit difficult.” 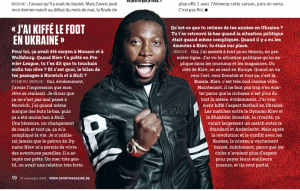 Explaining he will ‘never forget’ the opportunities given to him by the Dynamo Kiev chairman, Mbokani talks of a ‘great relationship’ with his former boss.

During his time at Carrow Road, the forward managed to score seven goals in 30 appearances, including one in a 5-4 defeat to Liverpool.

As for Hull City, the veteran never managed to find the back of the net in the Premier League, starting just eight, making 14 appearances and picking up two assists along the way.