Alex Bunbury may not be a name which registers for many West Ham supporters.

The Canadian striker only played for the club six times in a short spell but he feels the Hammers were pivotal for him.

Then, and it’s arguably even harder now, footballers in Canada faced a tough route to European football and being spotted by West Ham in 1992, whilst playing for Montreal Supra, launched Bunbury’s career.

Montreal Supra don’t exist any longer, going out of business in 1992, and Bunbury believes that Canada once again needs a professional league in order to give talented youngsters the chances which sent him on a remarkable football journey.

Playing for West Ham brought Bunbury to a wider European audience and whilst he may not have really made it as a Hammer, he got a move straight to Maritimo where he’d influence a future great. 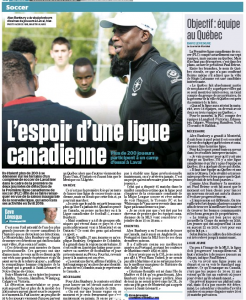 “Cristiano Ronaldo was born on the island of Madeira and says that growing up, Alex Bunbury was his favourite player. None of this would have happened without the CSL. I’m a little guy from Montreal who learned to play in Saint-Léonard.”

Bunbury didn’t score a single goal for West Ham, but it enabled him to go on and find the back of the net 59 times for the Portuguese island club.