Cast your mind back to 2011, when sections of Liverpool’s support suddenly became experts on Rioplatense Spanish.

They were, just like that, well versed in Uruguayan culture. Luis Suarez calling Patrice Evra a ‘Negrito’ was a term of endearment, we were all told. It was just a friendly thing people say in the South American country.

Mental images of white Uruguayan children patting their black friends on the head and going ‘Hey, Negrito’ were formed. What a cute wholesome situation, how dare anyone suggest that characterising a black person by their race be considered somewhat racist.

Oh no, by suggesting such it was the accusers who were in fact displaying prejudice, letting our xenophobia and inability to understand other cultures get the better of us.

In the end, it turned out Suarez had actually admitted to using the word ‘negro’, so all the mental gymnastics performed by the most enthusiastic of the fanbase became useless. Well, at least we got a little lesson from these overnight experts in all things Latin.

The whole situation gave a lesson in how things shouldn’t be done, and it was a lesson taken onboard by many. When the recent Bernardo Silva situation was in its infancy, some Manchester City fans were vocal: Don’t do a Suarez, don’t, no, we’ll only make ourselves look ridiculous, nope, don’t go there, hold fire.

Did it work? Of course not.

Like all fanbases, City’s is one which feels hard done to. They, absolutely rightly, bathe in the club’s relatively new success, but they feel there’s too many detractors.

All those pesky journalists and their human rights hang-ups, trying to cast a shadow on the reinvention of football. For decades, pretty much forever, they’d been in the shade of their neighbours and, now they’re the top dogs, some fans believe there’s an overeagerness to drag them down.

With success comes a platform and with that platform comes scrutiny, many of the more traditional Manchester City supporters will be well aware of that, having thrown any piece of mud they could when the red side of the city were on top.

When the Premier League champions are involved in a negative story it’s going to get more coverage than, say, Brighton & Hove Albion.

So, when Bernardo Silva posted the following about Benjamin Mendy on social media, it was never not going to be a big deal. 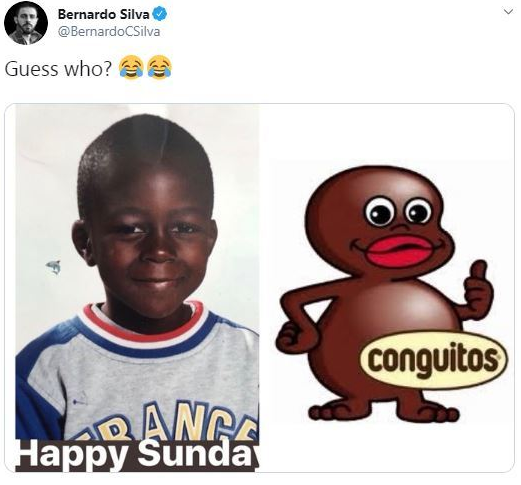 The inevitable questioning started, which led Silva to delete the tweet and respond.

Can’t even joke with a friend these days… You guys… 🤦🏻‍♂️

Mendy had laughed at the original post, so it was all cool and everyone saying anything was simply butting in on the friendship. Oh what an outrage hungry society etc etc

Yet Bernardo has more than half a million Twitter followers, he’s quite a big deal. He could have sent the message privately, and that he didn’t shows he must genuinely feel there’s nothing wrong in it.

Pep Guardiola came out swinging for his man.

“Honestly, I don’t know what will happen. They should put their focus on another issue because they don’t know which guy you are talking about.

“Bernardo is one of most lovely people I ever met in my life. He speaks four or five languages and that is the best way to understand how open-minded he is and one of his best friends is Mendy. He’s like a brother for him.

“Bernardo is an exceptional person. A guy who can speak five languages, it’s because he’s open-minded – nothing about the colour of the skin, nationalities or whatever.”

The Portugal international is, by all accounts, a genuinely nice and well educated person. That’s wonderful, but it doesn’t give him the sort of force-shield Pep seems to expect.

Had he instead been single-lingual Bernard from Urmston who grunts at the media, snaps at fans, and kicks the odd kitten, the message sent out wouldn’t have been any different.

John Barnes was then, as ever, pulled into the situation. He went on radio talking the situation down and faced his own backlash.

Responses to his messages saw a mixture of white people happy they now had support for brushing the Bernardo incident off, and likely their other issues, and black people angry and disappointed.

This image of John Barnes backheeling a banana thrown on the pitch by a racist was so powerful to me.

It angered and inspired me.
He was my hero.

If this picture surfaced now, John Barnes would pop up on TV to say it definitely wasn’t racist and the fan was sharing his lunch. pic.twitter.com/yNqwOyGOUf

Barnes had faced the worst racism during his career. One of the first black superstar footballers, he took the shit which would help lead to the, albeit slow, response. Just by being, he helped.

And now, in a different time and context, here he is telling other black people why they’re wrong to be offended by what is essentially a cartoon. Perhaps his stance in rooted in a belief that he faced the real racism and what happens now is nothing in comparison.

But this isn’t a cartoon which just so happens to resemble a black person. The chocolate brand is Conguitos, and if you go to Spanish language Google and type it in, one of the first options is ‘racista’.

This isn’t a controversy which has just been invented by over-eager English people who simply don’t get it, it’s very much been a thing in Spain.

In 2003, the artist who came up with the image, Juan Tudela Férez, made it clear he wouldn’t do similar again: “Things must be judged in their time and context. Today I would not have drawn it that way. I would not go on the market with that image and that name without having passed some essential tests before.”

It was drawn in 1961, and he explained: “At that time the independence of the Belgian Congo took place and a song about the country in question became fashionable.

“To draw the head I relied on the product. In Spain there were no African immigrants. We couldn’t even watch them on television, because we didn’t have them.”

A caricature of a black person based on news about the independence struggle in what is now the Democratic Republic of the Congo. This isn’t a random choice, and that the original Conguitos figure held a spear underlines that very much. 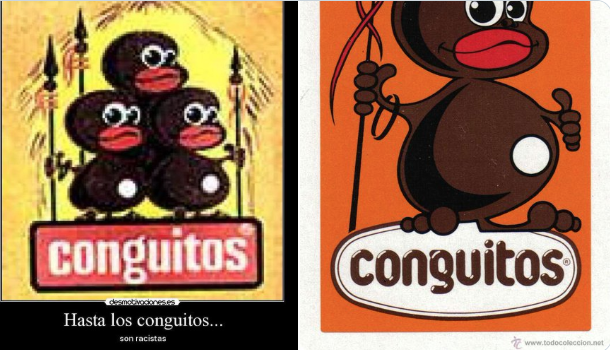 It couldn’t be much more racist, perhaps sticking a banana in the figure’s spear-free hand would be the only way. Oh, and it wasn’t just an image, they came up with a promotional video as well.

Comparing Kevin de Bruyne to Tintin is clearly not from the same stock.

Of course, there’s the argument that Bernardo Silva doesn’t know any of this, and that the controversy in Spain has also somehow managed to bypass the socially conscious Manchester City manager.

Barnes may be equally unaware, although he’s gone so far down the road of blaming black people for being offended by clearly racist portrayals that he may now be reluctant to move into reverse.

What there is no argument for is continuing the stance. That goes for Pep, lovely Bernardo, and fans so ready so ready to fight their corner that they don’t care which hill they die on.

“Sorry, Bernardo is very upset with the offence he’s caused.”