Home Premier League Chelsea ‘Steps have been taken’ – Chelsea move forward for signing, getting some...
SHARE

When Jorge Mendes has a meeting with a club official, there are endless claims regarding who the meeting could have been about.

The Gestifute list of clients will be looked at, and that encourages rumours for the likes of Cristiano Ronaldo, and, specifically this summer, Ruben Neves, Renato Sanches, Vitinha, Bernardo Silva and others.

What is often forgotten is that Mendes doesn’t just help arrange transfers for players he represents, and has a successful record of brokering other deals. AS cover this when they give their own take on Chelsea owner Todd Boehly meeting with the agent last week.

The Spanish newspaper say, according to their own information, one of the topics during the conversation was Jules Kounde potentially moving to Chelsea this summer. Thomas Tuchel’s side has long been linked with the player, as AS reiterate he already has a personal terms agreement to move to Stamford Bridge. 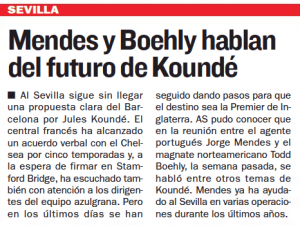 Mendes has helped Sevilla with ‘several operations’ in recent years, and the insinuation is he could be lending a helping hand on Kounde to Chelsea.

Despite the Premier League club stalling on the defender recently, it’s said ‘steps have been taken’ in the past week to get him to England.