Torino are making ‘advances’ for West Ham United midfielder Nikola Vlasic as he nears an exit from the London Stadium.

That’s according to Gazzetta Dello Sport, who say the Italian side are ‘raising the pressure’ to get a deal over the line.

Vlasic managed just six appearances as a starter and 552 minutes in total last season, struggling to establish himself under David Moyes after a €30m move from CSKA Moscow.

That’s led to suggestions he could be moved on by West Ham this summer, and Torino were named as one of his suitors last week.

It’s since been suggested that an exit is close to being secured on two separate occasions, and Gazzetta back that up somewhat today. 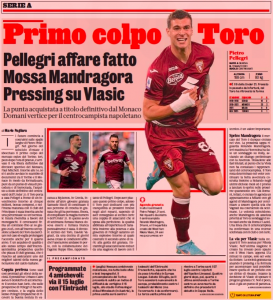 They say Torino are making ‘advances’ for the Croatian and ‘raising the pressure and the formula’ with West Ham to get a transfer done.

They want a loan deal with a right to buy tagged onto it, and the player’s desire to leave ‘is there’.

That is seen as ‘a starting point’ for them to also convince West Ham, and there is a growing confidence Vlasic will make the move at some point.