Another day, another Isco to the Premier League article in the Spanish media. Scoring for Real Madrid against Las Palmas on Wednesday evening, Isco is in good form and so the slant on a potential transfer has changed from ‘where will he go?’ to ‘oh no, this could be a big mistake’.

Still, a transfer is seen as very much a possibility, and once again Tottenham are dragged into the equation. At the end of the last summer transfer window there were claims Spurs had made an approach to loan Isco, but were put off by the player’s wage demands.

Since then the Tottenham links have been repeated at least once a week. On Thursday Spanish newspaper Marca say the chance of Isco moving to the Premier League in the summer is ‘very high’ and Tottenham are one of the candidates. 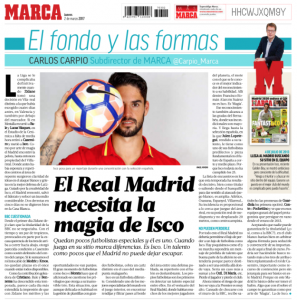 Isco is said to be ‘satisfied’ with the promises of Pochettino and others that he would play a star role for a club in the Premier League. Tired of playing second fiddle to the BBC of Bale, Benzema and Cristiano, Isco would be a stand out star at Tottenham.

As always it seems that Isco’s first choice would always be to stay where he is, and he just wants some more love from Real Madrid, and perhaps a bumper new deal.

Should Tottenham interest be genuine then it wouldn’t be a cheap deal, on wages especially.