Home Europe Star would rather join Manchester United than Bayern Munich, would be best...
SHARE

There has been a notion among a certain section of Real Madrid fans and football lovers that Gareth Bale’s playing at Real Madrid last season was reduced due to the forward’s injury concern. This is true for the first half of the season.

However, the Welsh international has managed to keep himself fit in this calendar year, but that hasn’t helped him to get regular playing time under Zinedine Zidane. He made only one start in the Champions League in 2018 was replaced after the first half, which was in his side’s 3-1 victory over Juventus.

Bale also came off the bench against Liverpool in the Champions League final and was the star player in Kiev, scoring two goals in their 3-1 victory over Jurgen Klopp’s side.

After the match, the 28-year-old expressed his unhappiness over limited playing time at the Spanish capital club and admitted that he would have a word with his agent before deciding on his future.

Spanish newspaper AS claim Manchester United and Bayern Munich are interested in signing the former Tottenham Hotspur star this summer. The Red Devils are said to be willing to bring Bale back to England and make him the highest paid played in the Premier League.

The Real Madrid forward hasn’t made a decision on his future as he is currently on vacation, touring top golf courses. The European champions appointed Julen Lopetegui as 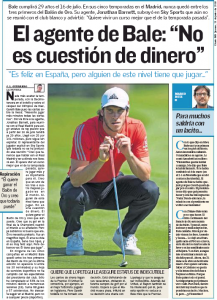 Zidane’s successor, and Bale will have a conversation with his new manager to find out if he’s major part of his plans.

The report claims that Bale would rather join Manchester United over Bayern, if he leaves Real Madrid this summer.

Bale’s love of golf is once again highlighted. This seems to be an irritation in Spain, that the Welshman would rather go for a round of gold than socialise with his teammates. It’s even been blamed for Bale’s injury issues.