Manchester City signed Kevin De Bruyne from VfL Wolfsburg in 2015, a year before Pep Guardiola arrived at the Etihad.

The Belgium international, who signed a new four-year contract back in April, is one of the key players under Guardiola.

He also continues to have an important role in the national team under the orders of Roberto Martínez.

France Football have published a detailed interview with De Bruyne, where his style, ability to make pinpoint passes and how he fits into Guardiola’s tactics were among the various topics discussed.

“With Pep, it means, ‘Go for it, don’t be afraid!’ As far as I’m concerned, he says, ‘Get the ball between the lines and attack the opposing defense!’ But, basically, the idea is really, ‘Take risks!’ Otherwise, we’d be spinning the ball for ninety minutes and not much would happen,” he said. 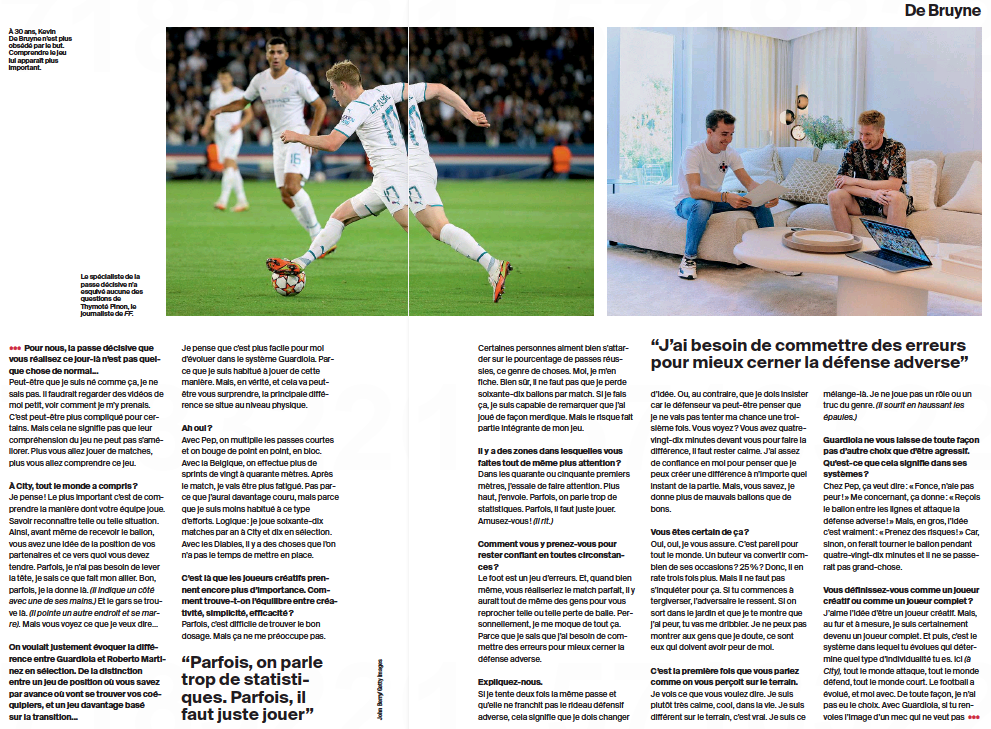 “I like the idea of ​​being a creative player. But, over time, I certainly became a complete player. And then, it’s the system you operate in that determines what type of individual you are.”

“Here (at City), everyone attacks, everyone defends, everyone runs. Football has evolved, and so have I. Either way, I had no choice.

“With Guardiola, if you send back the image of a guy who doesn’t want to run because you’re that creative guy or whatever, you don’t play. It’s pretty simple, actually (laughs).”

It wasn’t surprising to see De Bruyne quizzed over the differences between the former Barcelona manager and Martínez.

“I think it’s easier for me to evolve in Guardiola’s system because I’m used to playing that way. But, in truth, and it may surprise you, the main difference is at the physical level,” De Bruyne explained.

“With Pep, we multiply the short passes and we move from point to point, as a block. With Belgium, we do more sprints of twenty to forty meters.

“After the game [with Belgium], I will be more tired. Not because I would have run more, but because I am less used to this type of effort. Logic: I play 70 matches a year at City and 10 with Belgium. With De Rode Duivels, there are things you don’t have time to put in place.” 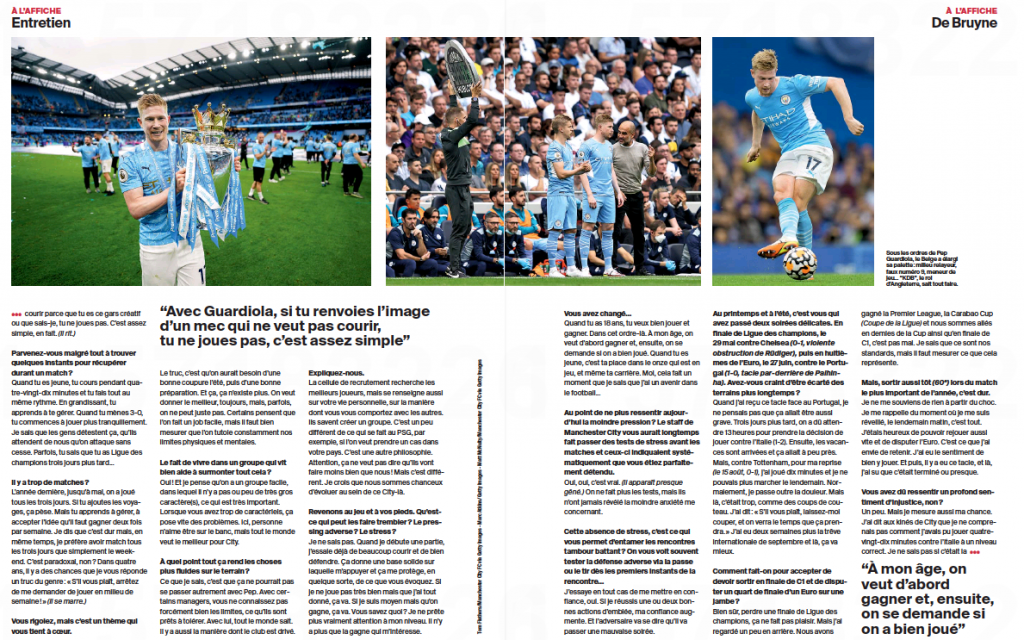 The former Chelsea man was also quick to say a lack of “big characters” in the dressing room has helped City on the pitch. When discussing this topic, De Bruyne also gave an insight into the Manchester club’s plans before bringing in a new player.

“I think we have an easy group, in which there is little or no very big character(s), which is very important. When you have too many characters, it quickly causes problems. No one here likes to be on the bench, but everyone wants the best for City,” the Belgian stressed.

“What I do know is that it couldn’t be any other way with Pep. With some managers, you don’t necessarily know the limits well, which they are willing to tolerate. With him, everyone knows. There is also the way the club is driven.

“The recruitment team looks for the best players, but they also learn about your personal life, about the way you behave with others. They know how to create a group.

“It’s a little different from what is done at PSG, for example, if you want to take a case in your country. It’s another philosophy. Be careful, that doesn’t mean they are going to do worse than us! But it’s different. I think we are lucky to be like that at City.”