Home Europe Star confident of Middlesbrough transfer, agreement can be found ‘within a few...
SHARE 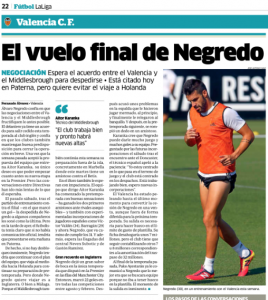 Last week there were claims Alvaro Negredo to Middlesbrough was already agreed, but that’s clearly not the case. Despite the complicated situation, the player himself remains confident that a deal can be done, and it appears someone close to him has been assuring the Spanish media things should be sorted out soon.

Monday’s edition of Spanish newspaper Marca has a feature on Negredo, outlining his confidence a deal can be reached quickly. Marca say Negredo hopes negotiations with Middlesbrough will ‘bear fruit as soon as possible’.

The striker has an agreement with Middlesbrough, but until the clubs are officially agreed between themselves, then Negredo has to turn up for training as usual, unless he’s informed otherwise.

Valencia have been fighting to make a Negredo move permanent, under direct orders from owner Peter Lim, but they’re having to compromise, seeing as the biggest issue is removing his wages from their bill.

Regional newspaper Super Deporte report on Monday that the message coming from the environment of Negredo is that an agreement can be found ‘within a few hours’. It’s claimed Valencia’s sporting director Jesus García Pitarch has been working to get a purchase price, for any loan to permanent deal option, as high as possible.