Among the many stories about the Champions League clash between Manchester United and Atalanta featured by the Italian media this week, Tuttosport manages an interview with someone who knows both clubs well.

The newspaper managed to speak to Massimo Taibi, who played for both the Red Devils and for the Serie A side during his career. The former goalkeeper, and current sporting director, gave some advice regarding the visit to Old Trafford.

“I know that stadium well, and I can assure you that it is really bedlam,” Taibi told Tuttosport.

“There are 70 thousand people who push and drag you to the last minute with chants and shouting the name of the team. United are a group that, especially in Europe, are able to demonstrate all its international appeal and experience. Atalanta will have to play as always, replying blow by blow and trying to pass the first 15-20 minutes unscathed, during which the English will press the accelerator to bring the match on their preferred track.”

Regarding Manchester United’s ups and downs at the start of the season, Taibi claims there’s still time for the team to get in shape to fight for titles.

“Manchester United have made important investments but they are also a team with young prospects. Little by little they’re growing also thanks to the good work of Solskjaer, and they’re in the running to win a place in the Champions League finals. The purchase of Cristiano Ronaldo then makes the group even more competitive, we’re talking about a player with 30 goals a year, who continues to make a difference. I was expecting his return because he made history in Manchester.” 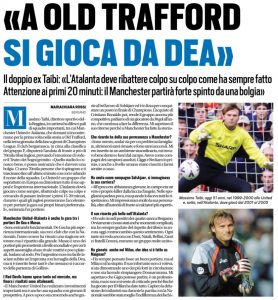 Taibi also spoke about his memories from Manchester United. He spent less than two years at the club between 1999 and 2001, having left for Reggina, the club where he’s a sporting director now. The former goalkeeper recalls the reason he moved away from Old Trafford.

“I’m honest, I left for a family problem, otherwise I would have stayed and maybe I’d still be there. I had inserted myself in an extraordinary environment, I felt good on and off the pitch. My teammates were absolute champions, Giggs and Beckham in the first place, and even on a human level they managed to make me feel at home.”

Regarding Ole Gunnar Solskjaer, he claims his former teammate was a quiet figure in the dressing room, but had already shown some signs that he could be in charge of a squad in the future.

“At the time he was quite young, on the pitch he was a real killer with an angel’s face. In the changing room he spoke little, but when he did, everyone respected him. I was very impressed by his personality, as well as his authority in front of the most experienced players.”