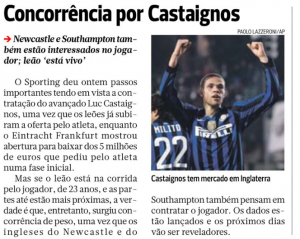 Newcastle United and Southampton are reportedly in the race to sign the Dutch attacker Luc Castaignos.

According to Portuguese newspaper A Bola on Wednesday, the English sides mean heavy competition for Sporting, who made “important steps” for the signing yesterday.

A Bola explain that Eintracht Frankfurt shave given signals they are prepared to drop the player’s €5m price tage, and now the Portuguese club are more confident of reaching a deal.

Despite saying the Magpies and the Saints are interested in the 23-year-old, there’s no information if these clubs have made an offer yet, but it’s not the first time their interest has been claimed and reported.

Despite being left out of the team for more than three months because of a ligament injury, Castaignos scored four goals and made three assists in the Bundesliga last season.