Home Europe Spanish club wanting to do business with Manchester City on a permanent...
SHARE 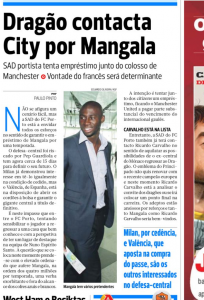 The Portuguese club’s interest in the defender had already been claimed by Tuttosport on Saturday, as they said that Milan and Valencia would be in the race too.

A Bola claims the same thing today, with a few more details on how the negotiations are going.

They say that Milan and Porto want the player on loan, and Valencia is the only club who are ready to pay for a permanent transfer.

In Porto’s case, despite having the argument to bring the player back to his old home, the club can’t afford Mangala’s wages, so Manchester City would have to help them by paying a big part of the player’s salary.

That’s exactly what Tuttosport said about Milan, so it really looks like a case of choosing who’s less worse here, unless Valencia show up with a convincing bid.

It must be said, Valencia also have financial issues right now and are having to sell players. It’s just bad luck for Manchester City that everyone who wants Mangala seems to be struggling financially.