When Atletico Madrid decided to sign Jonny Castro this summer and then loan him out to Wolves because they felt overstocked at fullback, it was inevitable they’d have a rash of injuries and doubt in the position.

This is the work of the Football Gods.

Juanfran is injured. Diego Simeone then turned to Stefan Savic as cover for the match against Celta Vigo, and it went badly, so badly he ended up getting sent off for two yellow cards, being replaced by Santiago Arias.

The right back position is said to be ‘proving a headache’ for Diego Simeone, report AS, after Atletico loaned Šime Vrsaljko to Inter Milan, with a view to a permanent deal. Thomas Partey has been used there, and that didn’t really work either.

So in the past two games, four different players have been used at right back.

Arias was signed from PSV for the position, but he’s not thought to be ready to make it his own, with Simeone quoted as saying: “It’s okay, we’re working with him on the things we understand that he has to improve.” 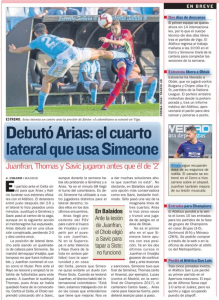 Meanwhile, Jonny is easing into his Premier League life and doing well for Wolves. The defender can play anywhere across the back four and has experience at right back which Simeone would have surely used over the past week.

There’s been no reporting of a call-back clause in the season long loan, but if there is one, and Atletico’s issues continue, then it’ll be no surprise should Wolves receive a call.