Home Europe Spaniard says he’ll be at Tottenham next season, fan of Pochettino and...
SHARE

Spain doesn’t only have a series of sport newspapers, but some of those have regional editions.

Wednesday’s edition of Mundo Deportivo Bizkaia has Fernando Llorente on the front page. Tottenham’s back-up striker has been in his home region modelling sunglasses, and the newspaper managed to grab a quick chat.

With it being prime transfer season, and with Llorente being firmly behind Harry Kane at Spurs, Llorente was asked about a possible move this summer.

There have been several Spanish links with the player, and Mundo Deportivo say Athletic Club Bilbao, Alaves and Valladolid have all had transfer reports and/or interest.

Llorente denied he’s received any serious approaches: “I have no offers from any club in Spain or anywhere else and I will continue at Tottenham where I have one more year of contract.”

The Tottenham player said moving to Wales and then England has been a ‘very positive’ experience, before adding: “I am very happy with the Premier League. It’s a spectacular 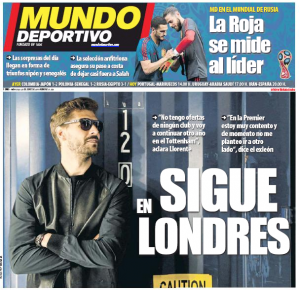 championship, with an impressive atmosphere and I’m very happy to be living this experience.”

Mundo Deportivo asked Llorente how he felt about Mauricio Pochettino being linked with Real Madrid, and the Spaniard said he had ‘serious doubts’ his manager would move because he’s ‘very important’ to everyone at Tottenham.