Wolves fans are used to getting coverage in the Portuguese media. The Premier League club has practically been adopted by A Bola, O Jogo, Record and pals.

The vast majority of the coverage is very positive indeed, even if some journalists weren’t impressed with the city after visiting last week.

Now there’s some coverage from Spain, and from arguably the country’s leading sport newspaper Marca.

In their Friday edition, Marca has an article on the impact of Jorge Mendes at Wolves, and the slant could have gone one of two ways. This time it’s positive.

Marca call Mendes the ‘wolf’ of the Premier League and explain that Wolves, who it’s pointed out were a founder member of the English league, learned a while ago that to succeed in modern football the efforts must begin in the office rather than on the pitch.

Wolves have taken this ‘process of modernisation’ a step further. The club’s owners investing in Gestifute gets a mention but this isn’t Marca suggesting there’s something 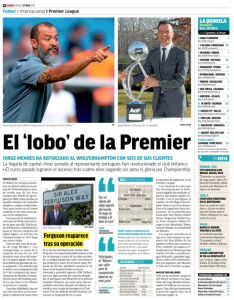 dodgy, rather explaining how the club have made things work for them.

Mendes is dubbed Wolves’ King Midas and Marca expect the growth efforts to continue from here.

Getting a full page in the Spanish newspaper is another sign of Wolves arriving.