Club Athletic Bilbao have a very limited recruitment base. The club only sign players from the Basque regions or ones who have very strong connections to it, and Mikel Merino falls into the buyable category.

Athletic had hoped, and expected, to sign Merino this week from Borussia Dortmund, on a permanent deal. It would have added to the Basque side’s strength in the position as well as planning for the future.

However, Newcastle United have swooped in and beaten them. Spanish newspaper Marca say Dortmund prefer the Newcastle sale because it’s initially on loan, with Merino ending up permanently at St James’ park if he plays a certain number of games. 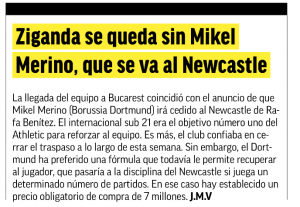 why they’ve lost out to Newcastle. Athletic coach Ziganda is quoted by AS as saying: “I know his father and as far as I’m concerned I can only wish him luck, he’ll do well.”

Local Dortmund newspaper Ruhr Nachrichten say Merino was released by Dortmund to speak to Newcastle United and agree his move to St Jame’s Park. In Germany it’s being treated as a permanent transfer, whether it’s a loan upfront or not.

Losing Mikel Merino to Rafael Benitez and Newcastle United is a blow to Athletic Club Bilbao, and one they should have avoided, they can’t just go out and choose another player.