Tottenham Hotspur are back in the picture for Pau Torres, a year after they failed to take him away from Villarreal.

Earlier this year, the defender revealed Spurs offered him better wages to join them last summer. However, he snubbed the north London club as he was keen to represent the Yellow Submarine in the Champions League in the recently concluded season.

El Periódico Mediterráneo relay this in today’s edition of the newspaper and add that Tottenham Hotspur are now monitoring the 25-year-old.

Antonio Conte has helped the north London club qualify for next season’s Champions League. The La Liga side finished in seventh spot and will have to settle for the UEFA Conference League.

The situation with both clubs has ‘completely reversed’. Due to that, the report explains ‘an agreement between all parties would be more feasible’. 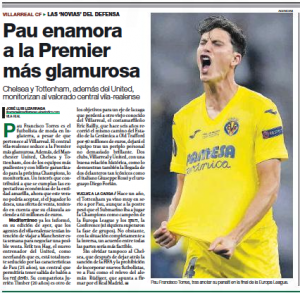 Torres has a €60m clause in his contract and is already seducing clubs in England. Unai Emery’s side are open to accepting his sale if the player’s suitors meet their economic demands.

It needs to seen whether Tottenham Hotspur will submit an offer again to sign the centre-back. If Spurs make a fresh proposal, then there is a possibility of a deal being carried out this summer.