Home Europe From Spain: Barcelona keen on Man City’s Brazilian ace, and have another...
SHARE

Tuesday’s edition of Spanish newspaper AS goes over Barcelona’s plans in the transfer market after the signing of Antoine Griezmann failed.

The Atletico Madrid player decided to stay where he is, after a long and dramatic process which saw the Frenchman receive plenty of attention and thrive on it.

AS believe Barcelona are still looking for someone who can add goals and the World Cup has brought up some options such as Aleksandr Golovin and Hirving Lozano.

But there’s someone else who has caught the Catalan club’s eye… Manchester City’s Gabriel Jesus.

In a link which hasn’t been pushed around a lot, but may be now, AS say Gabriel Jesus is to Barca’s ‘taste’.

They don’t sound very confident about the club’s chances, and add: ‘Like in the day of Aguero, it seems impossible considering the status of buying club and non-seller that is City.’ 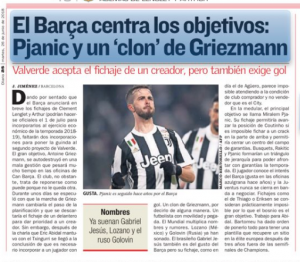 The main objective for the ‘core’ of the team is Juventus’ Miralem Pjanic, a rumour which has been further motivated by the player being spotted at Barcelona’s El Prat airport over the past few days.

This is all probably nothing for Manchester City to worry about, unless Gabriel Jesus himself finds out and goes all Barca crazy.