Home Championship From Spain: Aston Villa and Crystal Palace have made offers for same...
SHARE

Congratulations to Aston Villa. It’s not even September yet and somehow Steve Bruce has managed to get the Championship side promoted.

Spanish newspaper AS have a Wednesday feature on players Barcelona are trying to ship out, and have been for a while without much luck, with Thomas Vermaelen one of the major candidates/culprits.

It’s been a long transfer window, so AS can be forgiven, but the repeated claims of 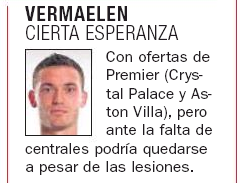 Vermaelen interest are getting tiresome.

On Tuesday it was Everton and West Brom linked in Belgium, and today it’s the turn of Aston Villa and Crystal Palace.

Half the Premier League have been linked to the injury cursed defender, who is excellent at his best, and now it seems Championship clubs are being sneaked in.