Dani Ceballos left Real Madrid and joined Arsenal on a dry loan deal in the summer.

The Spain international has impressed for the Gunners this season and his performances for the north London club have seen him regain his place in the national team.

On October 19th, we carried a report from El Desmarque, who explained the 23-year-old is ‘willing’ to say goodbye to his parent club to join Unai Emery’s side on a permanent deal.

The International Centre for Sports Studies (CIES) findings stated Ceballos is the most valued Real Madrid player who is out on loan. They value him around €65.7m.

Spanish newspaper AS has a report on these players and they provide a short update on Ceballos. 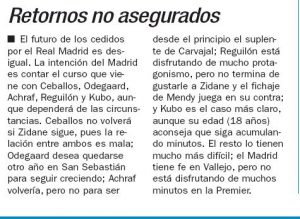 It’s claimed he ‘will not return’ to Real Madrid if Zinedine Zidane is still in charge at Bernabéu after the end of this season. That’s because Ceballos’ relationship with the Frenchman is ‘bad’.

Zidane’s continuity in Madrid will come as a welcome boost for Arsenal in their efforts to sign Ceballos on a permanent transfer.