Every time the Portuguese media speaks about Jovane’s renewal with Sporting, they’ll recall that he’s wanted by Premier League clubs.

Today it’s newspaper Record who writes he’s in negotiations for a contract until 2025 and is demanding a salary which suits his importance in the team.

That’s where the outlet mentions that Southampton and West Ham both wanted to sign the winger in the last transfer window.

They say it was the Hammers first, then the Saints, who showed interest in him. But both clubs went away when they became aware Sporting’s demands were around €20m. 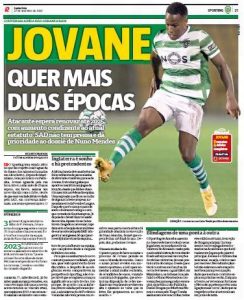 However, Record writes that the January window is ‘right around the corner’, clearly teasing that the Premier League sides could come for him again.

Jovane is currently protected by a release clause of €60m, and one of the crucial points in his renewal is that Sporting want to increase that.

As the Lions would certainly demand more than they did in the summer, it seems unlikely that Southampton and West Ham would be back to pay a bigger price now. But as always, the Portuguese press loves leaving that possibility open.