Last Thursday saw a story emerge in Portugal that Nice’s defensive midfielder Jean-Michael Seri was being tracked by Southampton with a summer transfer potentially on the cards.

The story appeared to come from the 25-year-old’s former club, Pacos de Ferreira, who received £850 for him back in 2015, as they seem to be hoping for a sale, as they would receive a percentage of any future fee.

We questioned the €2-4m price tag A Bola were putting forward, as Seri has been a very important player to Nice this season, and, for example, Transfermarkt (which should only ever be used as a guide at best) value him at over £10m.

His performances this season have been incredibly consistent, and the defensive midfielder once again featured in L’Equipe’s team of the week, picking up a 7/10 for his efforts against Bordeaux on Sunday. 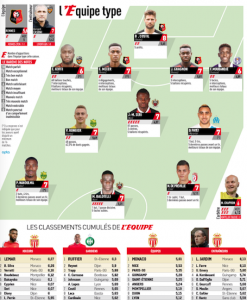 This is the fifth time Seri has been placed in the French newspaper’s top XI, and, according to the averages rankings published alongside the team, Seri has been the league’s 6th most consistent performer, behind the likes of Thomas Lemar, Bernardo Silva or Marco Verratti.

Southampton’s interest in him makes a lot of sense, as we previously explained, and with Claude Puel now in charge at St Mary’s, it wouldn’t be surprising if we saw more of these stories as the summer transfer window approaches.

Adding such a consistent performer to his team would certainly help avoid the ups and downs Southampton have faced during the current campaign, as they currently sit 17 points behind sixth.

A lack of European football will certainly be an issue for the Saints going into the summer, and with Nice currently on course to qualify for the Champions League qualifiers next season, a move to St Mary’s could be one Seri chooses to turn down in favour of playing in the elite competition.

One to keep an eye on over the coming weeks.