Demarai Gray’s contract with Leicester City expires at the end of June this year, which means he can now negotiate a free transfer with other clubs.

Saturday’s edition of Record covers interest from Benfica. The Lisbon club see Gray as a ‘dream’ signing but they’re aware of ‘many difficulties’ between them and signing the Foxes man.

One major problem for Benfica is Southampton, according to the Portuguese newspaper. The Saints ‘have taken the first steps’ to signing Gray, by contacting his entourage and finding out the conditions of a deal.

That’s presumably on the basis of a summer free transfer and working to find out his salary requirements, rather than relating to a move in the January window. Benfica wouldn’t be able to match the financial conditions Southampton are able to offer, and that’s even before a potential signing-on fee. 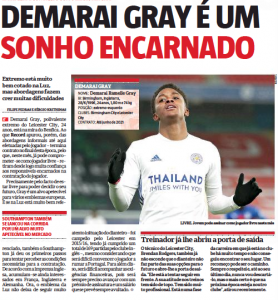 Therefore, the Liga NOS side would have to hope Southampton and other interested parties back away, leaving them a clearer run at the 24-year-old Leicester City player.