Home Europe Southampton still in race for Portuguese defender – Have made bid for...
SHARE

For the past few days, the Spanish media has been having several reports saying Valencia are interested in Porto defender Diogo Leite.

Portuguese outlets have been covering these claims today, and newspaper O Jogo is the one who has some exclusive information on the race for the 21-year-old.

They say there are other clubs who’ve been chasing Diogo Leite, with one of them coming from the Premier League, specifically Southampton.

Besides Valencia and Saints, there’s the interest from clubs such as Feyenoord, Sevilla, Besiktas, Ajax, Bordeaux and Borussia Monchengladbach. 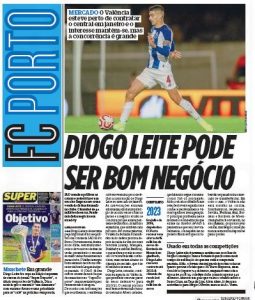 It’s said all these clubs have made bids for the player in the past and continue to make the list of competitors for the signing.

O Jogo doesn’t say how much Porto would want to let Diogo Leite go, but they make it clear that the defender is currently protected by a release clause of €40m and a contract running until 2024.