Andrea Petagna is having to look for a new club, reports Corriere della Sera on Wednesday. Along with Andreas Cornelius, he’s surplus to requirements at Atalanta and is trying to find a new home elsewhere.

For Cornelius it’s hoped interest will come forward now Denmark have been knocked out of the World Cup, but no potential destinations are named for the former Cardiff City player.

Petagna looks in a better position. It’s reported he’s already got an offer from Spal which is being considered, but there’s also been interest from England, with Southampton presented as the likeliest Premier League club.

Mark Hughes’ club ‘seem ready to make an offer’ for the player, whereas Wolves are described as moving on to ‘other tracks’.

Wolves have been linked with several players in Italy over the past week, but Corriere della Sera don’t think they’re especially serious about Petagna and are looking at other 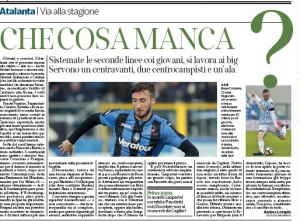 Spal’s approach to Atalanta is worth €10m plus a percentage share of a future sale, and it’s reported that Atalanta may be willing to accept such an offer.