Southampton have been in contact with Benfica to ask about a potential move for Nuno Tavares, but face competition from Napoli for him.

That’s according to O Jogo, who report that Southampton have ‘requested information’ ahead of a possible offer for the 21-year-old.

The newspaper explains that a departure ‘remains on the table’ for Tavares this summer, and he is aware of several clubs showing interest in him.

One of those are Napoli after the recent appointment of Luciano Spalletti, who has been asked to give his backing to the deal. 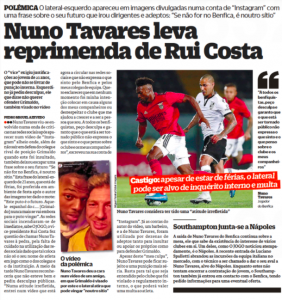 While they are not trying to ‘close in’ on the left-back at this moment in time, Southampton have also ‘made contact’ with Benfica about a potential move.

There is no mention of an asking price at this point in time, but Tavares could be open to a move, having recently complained on social media about a lack of playing time.

That earned him a reprimand from the Portuguese club, who could now give him what he wants via a move away, with Southampton and Napoli interested.