Southampton boss Ralph Hassehuttl has revealed his stirring message to his players when it comes to the top six this season.

The Saints have enjoyed a flying start to the season this year and sit fourth in the table on sixteen points after eight games.

There have already been several impressive performances in those games too, with wins over high flying Everton and Aston Villa and a battling 3-3 draw with Chelsea standing out in particular.

Their form comes following a strong end to last season, with Southampton flying post-lockdown one they had secured their Premier League status.

The key result in there was a 1-0 win over Manchester City, a result Hassehuttl says changed the mentality of his players.

“It all started with the lockdown,” he told SportBILD.

“After that, we came back fitter and, above all, much stronger in terms of football. Without all the pressure and without spectators, we took more risk and benefited from it in the end.

“The highlight was then the 1-0 victory against Man City. From then on, the conviction was finally there that we could beat anyone.

“I told the boys: We want to be pirates, and our goal this season is to plunder the wealthy elite again and again – in other words, to beat the big clubs.”

For now, the Premier League will remain a sport without fans as the United Kingdom continues to battle the Coronavirus epidemic.

News over the last two weeks of several vaccines becoming available has sparked hopes that fans will be able to return sooner rather than later.

That, though, remains a future dream at present, with England still in its second lockdown in an attempt to avoid another spike in infections.

The Southampton boss is certainly not taking any risks, having battled against the hantavirus in 2012.

“For me, not much will change. We are working normally as usual,” he added.

“It’s more of an advantage because players are less likely to get infected with the virus. But I hope that we can start with the vaccinations soon. 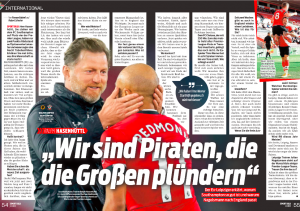 “That would be a huge piece of security for everyone. I know what it is like to be infected with a virus that brutally hurts you.

“In 2012, I had the hantavirus which was not immediately recognised either. I was young and fit, thought nothing could happen to me.

“But then I was in incredible pain, lying in intensive care. That is why I am very careful now.”