On Thursday, we covered the latest from both France and Turkey regarding the potential exit of Mario Lemina at Southampton.

The Gabon international has been with the Saints since 2017, but hasn’t been a part of Ralph Hasenhüttl’s plans for the last two seasons, spending loans at both Galatasaray and Fulham.

This has placed a big question mark on his future at the club, and many teams around Europe are reportedly interested in the 27-year-old’s services.

Among those are Nice, to whom L’Equipe claim Lemina is ‘getting closer’.

Now managed by former Lille manager Christophe Galtier, the Ligue 1 side are undergoing an adventurous transfer window, and after signing the likes of Calvin Stengs from AZ Alkmaar, they are looking for a bit more experience. 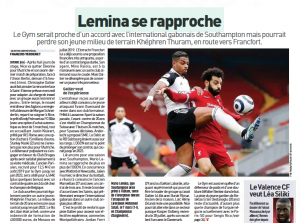 That’s where Lemina comes in, and it’s explained that despite competition from Watford and Newcastle, Julien Fournier, the club’s director of football, has ‘managed to convince’ the midfielder with a three-year contract.

All that’s left now is to ‘find an agreement’ with Southampton, who would rather send him to another English club, likely to offer more money in the process.

Still, the player’s choice appears to be Nice, so it’ll be up to both sides to now find an adequate fee that suits all parties.