After weeks of claims from the Portuguese media saying Napoli were the frontrunners to sign Benfica fullback Nuno Tavares, it now seems the Italian side failed in their last attempt to get the 21-year-old.

We get a couple of reports saying that today. Both A Bola and O Jogo claim that the Eagles turned down an offer from the Serie A side of €10m + €2m for the player, now giving new chances to the other clubs who want him.

And it turns out that both outlets also name Southampton as potential contenders.

Starting with A Bola, they feature a headline saying Tavares now ‘aims’ towards England. They say there are several clubs who want him in the country, and Saints are ‘one of them’, while Benfica demand €15m for the move.

The outlet says it’s ‘certain’ that Tavares will change clubs this summer, adding quotes from agent Cesar Boaventura, who’s not the player’s representative, telling the Italian media this week that the 21-year-old is not joining Napoli.

The official apparently said the fullback still has offers from ‘Marseille’ and others from ‘France and England’. 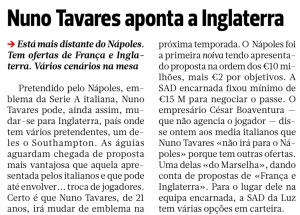 Meanwhile, O Jogo are more focused on Benfica’s talks with Napoli. They point out that even after having the first offer rejected, the Italian side still tried to put some of their players on the table, and that still wasn’t enough to convince the Eagles.

O Jogo adds that the player has more ‘doors’ open, including from Brighton and Southampton, who’ve already made approaches for the signing.

The outlet is confident that Tavares should leave Benfica this summer, so much so that he should have his physical tests for the start of the season delayed while he sorts out his future.