Home Europe Southampton man’s future ‘will depend on destiny’ of other players – Door...
SHARE

As bad as Wesley Hoedt’s return to Lazio has been, some members the Italian media still haven’t entirely given up hope on him, opening the door to him remaining at the club next season.

Despite early appearances when looking at Thursday’s edition of Il Tempo, who have an article about the future of a few players with the subheading reading ‘Goodbye to Hoedt and Musacchio’, the text suggests the Southampton loanee could be kept.

Following a bit on Manchester United’s Andreas Pereira, whose purchase clause stands at €27m, the newspaper write that, to get the Dutchman, the ‘financial expense would be decisively lower’.

While that’s promising, it’s also explained that ‘a lot will depend on the destiny of other members of the squad’, namely Luiz Felipe, as the Brazilian hasn’t renewed his contract, set to expire in 2022. 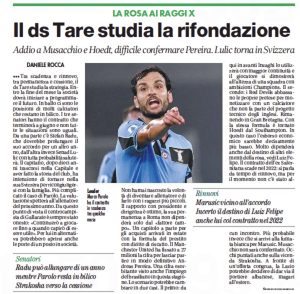 This suggests he could be sold this summer to avoid him leaving on a free, which could open the door to Hoedt being bought full time.

It must be pointed out that the general consensus so far has been that the centre-back will return to Southampton to add an extra headache to Ralph Hasenhüttl’s already likely busy summer, but, if there’s a chance they can get rid of him sooner rather than later, then it’s fair to say the Saints would jump at the opportunity.