The Premier League is calling for Ruben Semedo. After months and months of rumours, the recent reports from Portugal make the transfer sound a lot more likely.

Record comes up with an interesting story today saying the Sporting defender met his agent Catio Balde last night to become aware of the clubs interested in him.

It’s said that Stoke City have now joined Everton and Southampton in the race, but it’s really the Saints who are in ‘pole-position’. 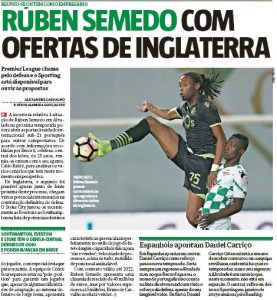 Although Semedo has a €45m release clause, and Sporting normally push for the maximum they can get, things are a bit different this time. The player has been benched for some fixtures lately, and that’s why the club will now listen to offers.

Record claims Sporting president Bruno de Carvalho will accept to sell the player for at least €15m, which is a huge amount for the Premier League clubs.

However, Sporting always like to extract every penny possible out of a transfer, so €15m sounds on the low side, especially with Everton and Stoke now said to be rivalling Southampton.

If Everton, Stoke, and Southampton were genuinely in a battle for Semedo then one would expect a higher price.