According to a claim from Takvim, Southampton are showing an interest in Fenerbahce midfielder Ozan Tufan.

Ralph Hasenhüttl will be looking to strengthen his squad in the summer and the Fener captain could be an option. It’s claimed Southampton sent a scout at the weekend to watch him during the Istanbul derby against Galatasaray.

Signed from Bursaspor for €7m in 2015, Tufan was on the brink of leaving Fenerbahce before a loan move to Alanyaspor last season helped him get his career back on track. There were reports he was on the verge of joining Crystal Palace.

After returning to the Yellow Canaries as an improved player he’s featured in every Super Lig game this campaign. 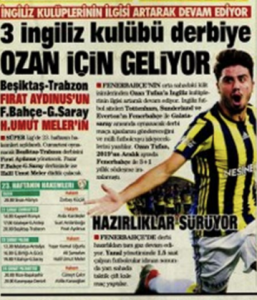 The 24 year old recently signed a contract extension until June 2023 and subsequently Southampton would have to meet his €20m buyout clause if they want to sign him this summer.

He’s scored two goals and made five assists so far in the Turkish Super Lig this season.