Hiring a manager who spent the past season in La Liga was bound to lead to Southampton being linked with players in Spain at some stage this summer.

Only signing Jan Bednarek so far, the Saints have been cautiously manoeuvring the transfer market so far, looking for the right deal to strengthen a side that many felt underachieved under Claude Puel last season.

Letting Jay Rodriguez go to West Brom for just under £12m, a new centre-forward could be on the agenda, although with Pellegrino’s preference to play 4-2-3-1 (which he did at Alaves), already having three on the books might be enough.

The news first emerged from Sky Sports in England on Tuesday night, but AS in Spain have a bit more information on the news that Southampton are interested in signing Luciano Vietto from Atlético Madrid, who spent last season on loan at Sevilla, where he scored 10 goals and picked up five assists in 31 appearances.

The Saints are said to be either interested in a loan or a full transfer for the 23-year-old, while Atlético Madrid would only consider a temporary exit, most likely as they would prefer to see how the forward develops before selling him on. 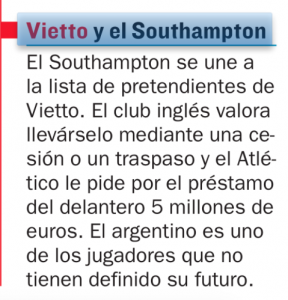 Much like they did with Sevilla, the La Liga side are asking for money up front for the loan deal, but have this time increased their demands from €3m to €5m.

That’s quite a lot of money for just one season, and we’ll have to see how much Pellegrino wants his compatriot at St Mary’s, but he clearly saw something in him last season in La Liga if he’s turned to him for his new club.